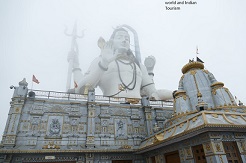 The four associated places of the Four Dhams in India


In the Puranas of, Hari (Vishnu) and Hara (Shiva) which referred to as eternal friends. It is said in the Puranas wherever Lord Vishnu resides, Lord Shiva resides nearby. The Chaar Dhaams follow the rule. So Kedarnath is considered to the pair of Badrinath, Rama Setu and it is considered the pair of Rameshwaram.
Somnath was considered to be in the pair of Dwarka. According to the traditions, one more thing is noticed here, Char Dham is Badrinath, Ranganatha-Swamy,, Dwarka and Jagannath-Puri all Four of which are Vaishnavite sites and their associated places which are Kedarnath, Rameswaram, Somnath and Lingaraja Temple, Bhubaneswar (or maybe Gupteshwar) respectively.


Puri located on the east, which is located in the state Odisha, India. Puri is one of the primitive cities in the eastern part of India. It is situated on the coast of the Bay of  Bengal. The main deity was Shri Krishna, who was regarded as Lord Jagannath. It is a temple in India where Lord Krishna's sister Subhadra is worshiped along with her brothers, Lord Jagannatha and Lord Balabhadra. The main temple here which is about 1000 years old and constructed by Raja Choda Ganga Deva and Raja Tritiya Ananga Bhima Deva.
Puri is the site of the Govardhana Matha, one of the four cardinal institutions (Mathas) converted by the help of  Adi Shankaracharya. Pandit Neelkanth Das suggested that Jagannath was a deity of Jain origin because of the addition of Nath to many Jain Tirthankaras. Jagannath was meant to be a 'world person' in a Jain context and originated from Jonath. Evidence of Jain vocabulary, like Kaivalya, which meant moksha or salvation, which is found in the Jagannath tradition. Similarly, the twenty-two steps leading about the temple, called the Baisi Pahacha, which have been proposed as symbolic reverence for the first 22 of the 24 Tirthankaras of Jainism.

According to the Anirudh Das, the origin of Jagannath deity was influenced by the Jainism and is none other than the Jina of Kalinga taken to the Magadh by Mahapadma Nanda. The theory of the Jain origins is supported by the Jain Hathigumpha inscription. It mentions the worship of a relic monument on the hill, in Khandagiri-Udayagiri. This place has been described as similar to the Jagannath temple site. the Jagannath shrine and it was restored by Jains, but looking to the authenticity and date of this text is unclear. This will the plume for Oriya people to the celebration of a special day on this Dham which is known as Ratha Yatra ("Chariot Festival").

Dwarka Rameswaram located in the South and is in the Indian state of Tamil Nadu. It is situated on the Gulf of Mannar to the very tip of the Indian peninsula. According to the legends, this is the place where Lord Rama along with his brother Laxman and devotee Hanuman built a bridge called Rama Setu for reaching to Sri Lanka for rescuing his wife Sita who had been kidnapped earlier by Ravan, the King of Sri Lanka. The Ramanatha Swamy Temple dedicated to Lord Shiva which occupies a major area to Rameswaram.
The temple is believed to have been consecrated to Shri Rama Chandra. Rameshwaram was significant to the Hindus as a pilgrimage of  Benaras is incomplete without a pilgrimage to Rameshwaram. The presiding deity here is in the form of a Linga (a stone structure which is another form of Shiva like Hanuman) with the name of Sri Ramanatha Swamy, it was also one of the twelve Jyotirlingas.


Badrinath Dwarka is located on the west which is in the state of Gujarat, country India. The city was derived by its name from the word "dvar" meaning door or gate in the Sanskrit language. It is located a confluence where the Gomti River merges on the Arabian Sea. However, the river Gomti is not the same Gomti River which is a tributary of Ganga River.
The city lies in the westernmost part of India. The legendary city of Dwarka was the abode of Lord Krishna. It was generally believed that due to damage and destruction by the sea, Dvaraka had submerged six times and in modern-day Dwarka is the 7th such city to be built in the area.

How to go Manali | Best Places to visit in Manali